Ancient Egypt is in chaos, thanks to the god of darkness Set (Butler) who usurps the throne and plunges Egypt into seemingly unending war. 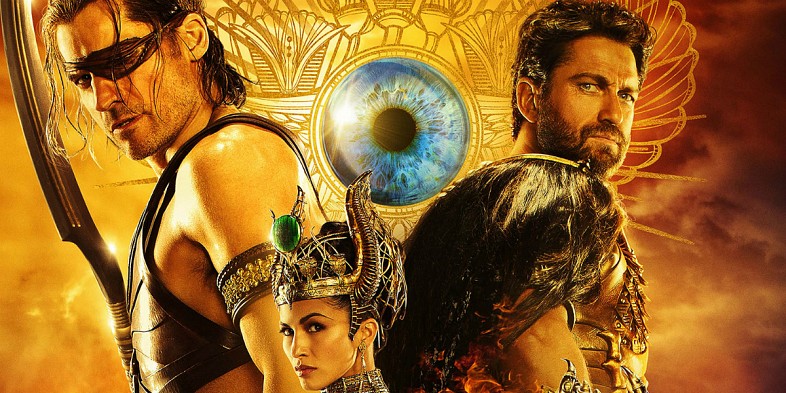 Amidst all of this is the mortal Bek’s (Thwaites) quest to bring his girlfriend back to life. To do this, he forms an alliance with none other than Horus (Coster-Waldau), who also wants to destroy Set, his ancient enemy. Will Horus and Bek succeed?

Gods of Egypt is a glorious mishmash of Egyptian mythology given the contemporary treatment, full-on CGI and pretty much every fantasy/mythology cliche in the book thrown in. Giant monsters, mythical ghouls, bronzed bodies, plenty of battles and tons of fancy costumes and body armour.

On one hand, we have a setting for a titanic battle between Horus and Set and on the other, a decidedly more human (or ‘mortal’ as humans tend to be referred to in such movies) element where Bek will do anything – including literally climbing the highest mountain, swimming the deepest seas and even dodge a god’s blows – to bring back his lady. In this world, there is no magic too outlandish and no effort too far-fetched.

Now, while the CGI is definitely a bit over-the-top, this film does have some good touches to it. For example, Geoffrey Rush has the unlikely task of playing Sun god Ra in here.

All it takes for him to grow ten times bigger, burst into flames and do battle with various dark forces, is a stern grimace.

Bek brings Horus one of his all-seeing eyes but manages to do a trade – he will help Horus get the other eye so that he can destroy Set but in exchange, Horus must help him bring his dead lady to life. Obviously Horus knows how to do this. He is a god, after all.

Interestingly, there a handful of jokes are scattered throughout the script. Some cheeky lines delivered deadpan-style could have livened things up greatly if the writers were more generous with it.

If kitsch mythology and a swords-and-sandals clad Butler along with various bosomy lasses float your boat, it’s passable.