A British woman has caused a stir in a village in Kajiado county after ditching her elderly Maasai lover and falling in love with his teenage son.

Rebekah O’Brien’s love drama began in October 2012 when she was on a filming course and volunteered as a steward at the Norwich theatre in England. 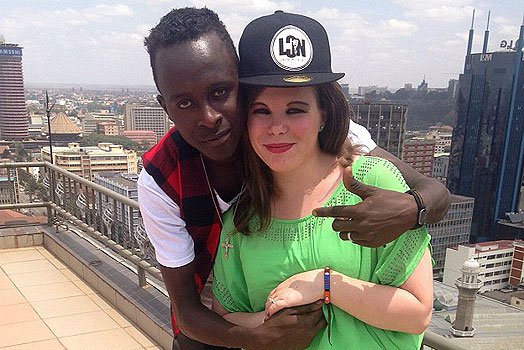 Like many fairytale stories, it was love at first sight when she laid eyes on Rempesa and his Osiligi warrior troupe who had held a performance of their songs and dances, at the Maddermarket theatre in Norwich in 2012.

The blooming romance saw the 26 year old Rebekah move to Kenya in January 2013. She flew out to stay in a manyatta in Kisames, in Kajiado county, an hour’s drive from Nairobi.

It was there that Rebekah and Rempesa, the village butcher, started a relationship.

Although he was already married with five children he told her their relationship was platonic.

She said: “My friends said I was mad to be running off with a Kenyan man, living in a tin hut with him and his first wife and five children.”

But when Rempesa’s wife died of an accidental overdose all blame was directed to her – the English outsider. But despite threats she and Rempesa kept their relationship alive.

“As a Western woman people were suspicious of me, but Rempesa was so kind, buying me food and drinks and always had time for me and made me feel welcome and special,” she said in an interview with the Daily Mail newspaper.

However her relationship with Rempesa took a turn for the worst in 2015 when in the final months of her pregnancy while in the United Kingdom, she and Rempesa broke up and Rebekah faced tragedy alone.

She gave birth to her daughter Arya who died just six weeks later.

Although heartbroken and grieving, Rebekah again craved for life in a Kenyan village.

But once she returned, she found herself falling for the warrior’s 19-year-old son Lawrence who is still in high school.

Rebekah then fell pregnant with her new lover Lawrence Kito last August, and returned to England to have their son who was born last week.

She is hoping to see Lawrence visit his child in England and has already sent him £600 (Ksh72, 000)  despite the fact he is unable to pay child support because he is still in school.

Rebekah told the Mirror newspaper: “I want Lawrence to be in his life, but I fear he sees me more as his mother than his girlfriend.”

“I suppose it didn’t help that I was basically his step-mum before we got together.”